Generation after generation may have felt that they met the absolute pinnacle of technological advancement, but if you look back 100 years ago, technologies that we take for granted today would have seemed like impossible feats. In today's day and age of rapid technological advancement and cut-throat competition, an environment has been cultivated where innovation and fast-paced production has pushed UAV technology forward faster than ever seen before.

2017 marked another significant year of growth for the drone industry in many aspects, with increased growth in sales, the number of new businesses entering the market space, and the number of industrial businesses integrating drone systems into their operations, according to Skylogic Research.

What was also very noteworthy in 2017 was the huge growth of drone technology in the Enterprise Sector. Thanks to extensive advancements in the intelligence, safety, and ease-of-use of modern-day drones, what started out as a consumer-oriented hobby has quickly shifted into more and more government and commercial sectors including Public Safety, Infrastructure, and Energy, and Agriculture. 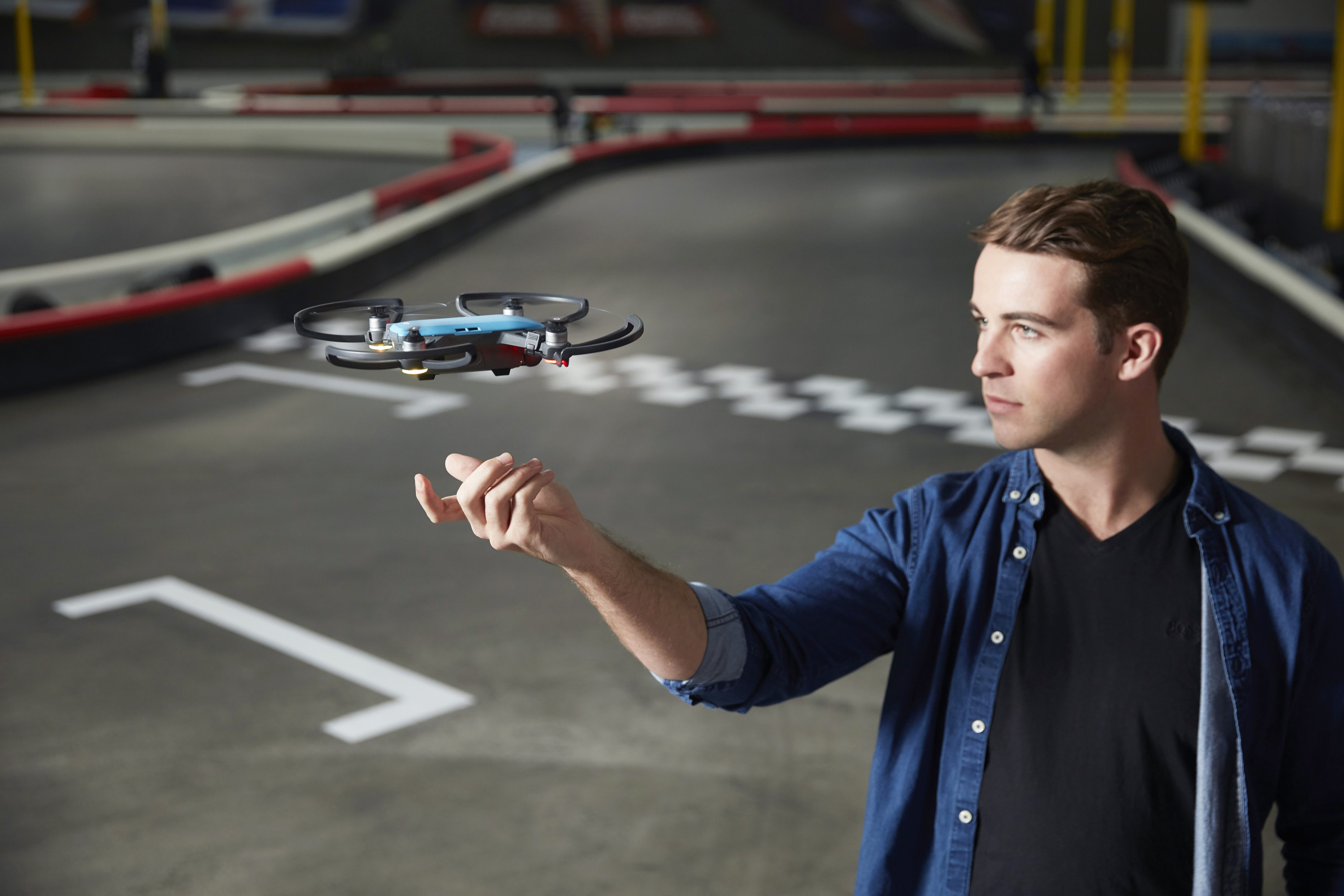 Both recreational and commercial drone enthusiasts were introduced to new drones and accessories in 2017 that took their aerial pursuits to all new heights. Once again, DJI, a drone manufacturer based in Shenzhen, China continued to dominate the industry, with the consistent and constant release of innovative new drones that proved to be more cutting-edge and sold at a fairer price point than anything else available on the market.

According to Skylogic data, DJI was the clear market leader in the year of 2017 with a 72% global market share across all price points and a higher market share of 87% in the core $1,000 - $1,999 price point category. Though other companies may have released a product or two, nothing could match the onslaught of drones, cameras, gimbals, and accessories released by DJI throughout the entirety of the year. The dominance of DJI in the industry has already led to a significant amount of layoffs at rival drone companies including 3DR, GoPro, Parrot, Autel, and Yuneec. 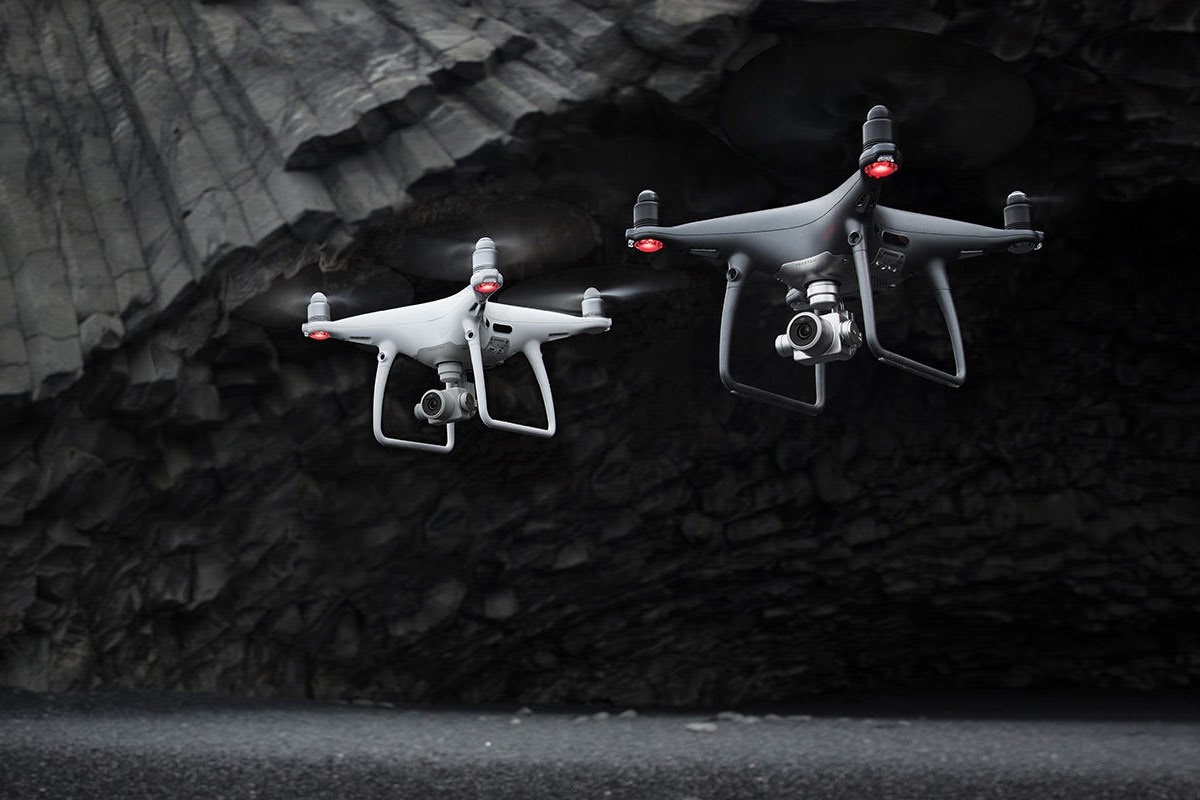 With the enormous rise of UAV technology assisting those in the commercial sector, in the beginning of 2017 DJI announced the release of their new DJI Matrice 200 series, a series specifically designed for usage in the commercial sector and for those looking to perform professional aerial inspections and collect data in the most efficient, cost-effective and easy-to-use way possible.

The Matrice 200 Series features three different versions, the M200, which can be equipped with one downward-facing gimbal mount, the M210 which can be equipped with two downward-facing mounts or one upward-facing mount, and finally, the M210 RTK for drastically increased accuracy and centimeter-level precision. With the ability to be mounted with two different cameras simultaneously, as well as IP43 classification protection from rain and dust, a dual-battery setup, and a durable, portable design, the Matrice 200 series features every ideal component for those looking to conduct professional and demanding aerial operations across a variety of sectors including Agriculture, Energy, and Infrastructure. 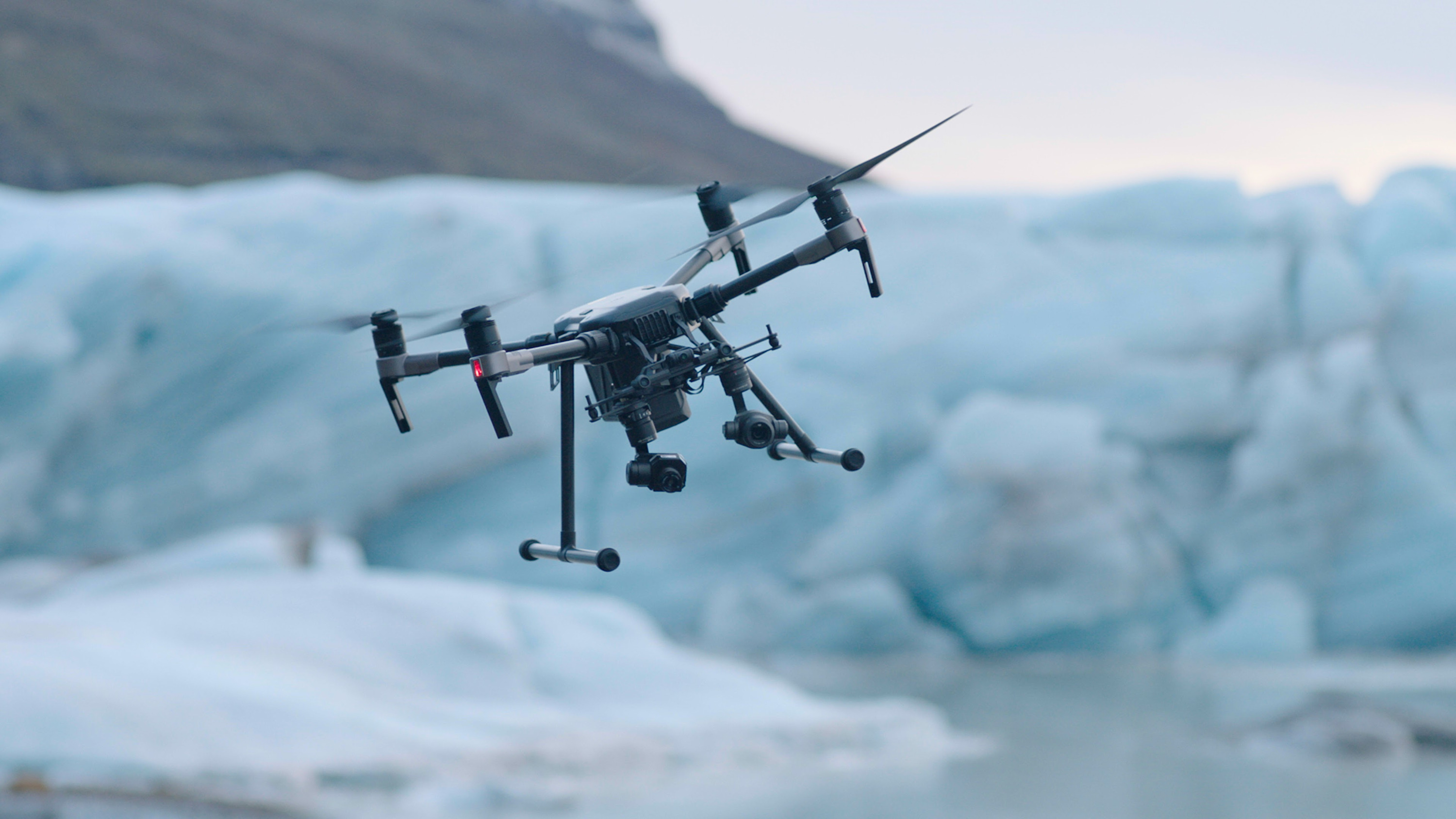 Since its release, the DJI Matrice 200 series has already made a significant impact in the commercial sector and has shown how quality design and intelligent advancement in UAV technology can improve the way operations are conducted. The Matrice 200 series has already proven to be a game-changing drone in the industry that provides a powerful, accurate and reliable aerial platform to assist in a variety of demanding Enterprise operations. By carrying over the simplicity and user-friendly controls of its consumer drones, DJI designed the most streamlined yet advanced commercial drone on the market. From solar panel inspections to search and rescue missions, the Matrice 200 series has shown the versatility and power a drone can bring to any application, to help optimize operations, collect more precise and accurate data, and keep workers out of harm's way. 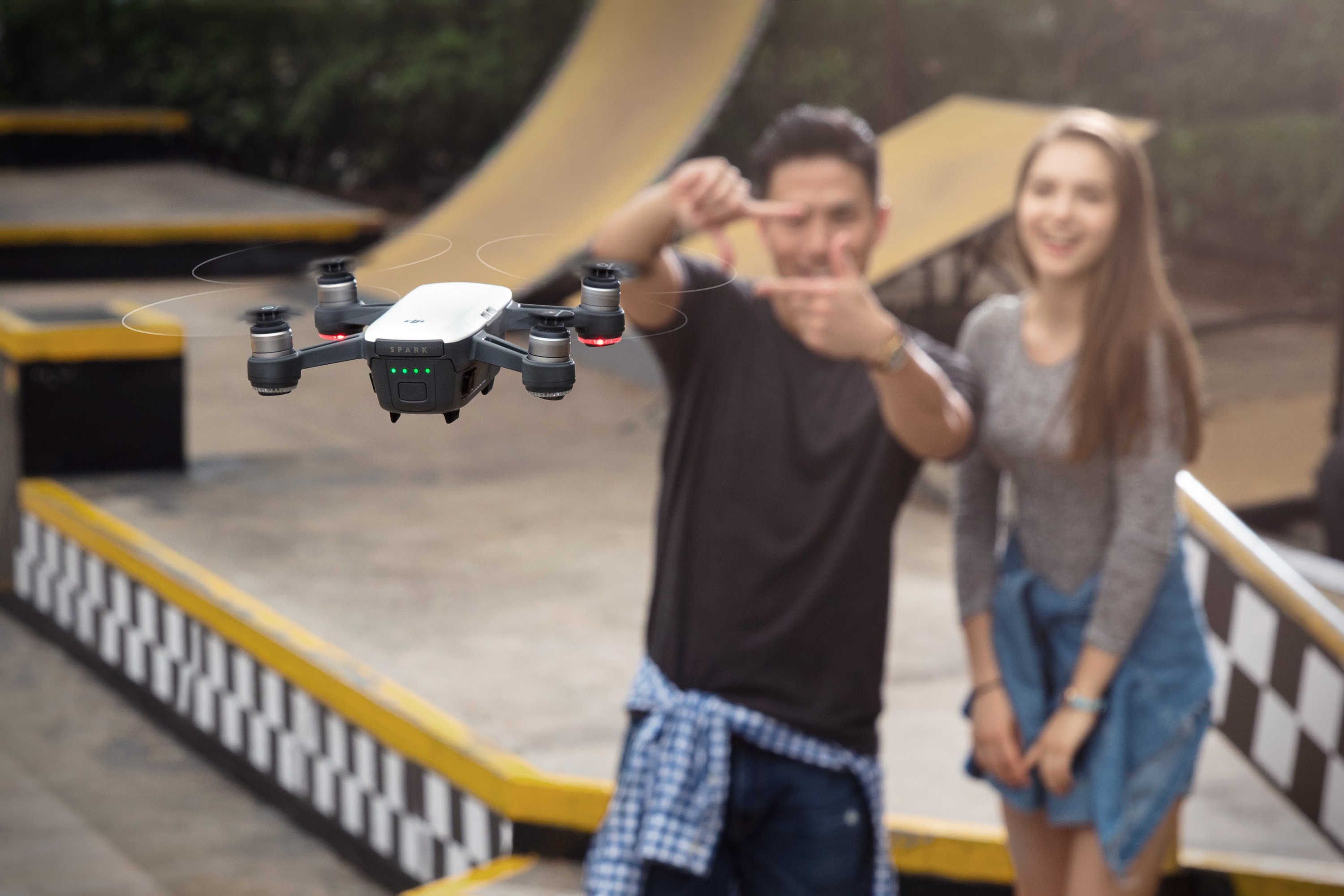 Segwaying from the commercial drone announced at the beginning of the year, in the Spring of 2017 DJI announced the portable, mini-drone named the DJI Spark. The DJI Spark was specifically designed to feature all of DJI's signature technologies, but cater to those looking for a more of a casual, or beginner-friendly drone at the most affordable price point in DJI's consumer drone lineup.

Weighing just 300 grams, the Spark is compact and roughly the size of the palm of your hand. The drone features a 2-axis gimbal unit and a camera that is capable of capturing stunning 1080p video and 12-megapixel stills. The Spark additionally features approximately 13 minutes of flight time, 100 meters of range when piloting with your cell phone, or 2 km of range when piloting with the Spark's remote controller. On top of all of its advanced features, the DJI Spark features a first-of-its-kind Gesture Mode, wherein users can land and launch the drone from the palm of their hand, and move the drone through the air with simple hand gestures.

With the launch of the Spark, DJI managed to bridge the gap between affordability and quality and offer up a recreational drone that was easy-to-use yet still highly advanced. The Spark's extremely user-friendly controls and design, along with all its state-of-the-art features have made the DJI Spark a go-to choice for any drone enthusiast looking to invest in their very first drone or for those looking to take to the skies with a reliable and high-quality drone that won't break the bank. At its price point, the Spark proved that DJI was opening the doors of drone technology to a much wider and more mainstream audience, and showcased just how far UAV technology has come since its days as a budding DIY, garage hobby.

The Mavic Pro Series - made for hobbyists 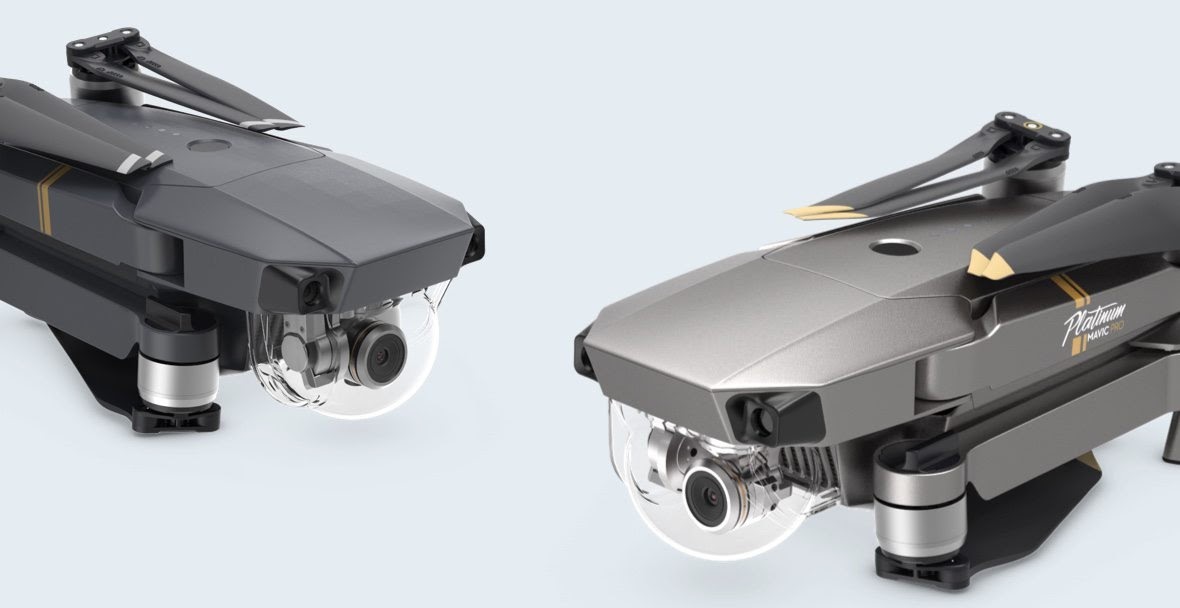 In the summer of 2017 DJI announced the upgraded version of their highly popular DJI Mavic Pro named the Mavic Pro Platinum. The Mavic Pro had already made a huge impact in the consumer drone market, becoming the go-to drone for hobbyists looking for an advanced, easy-to-use, and portable drone experience. With the release of the upgraded Mavic Pro Platinum, DJI made slight improvements to further improve the Mavic's overall performance, including a slightly longer battery life, quieter flight performance, and a purely aesthetic change of colour.

For both recreational and serious hobbyists, the Mavic Pro series changed the game in terms of its revolutionary and compact fold-down design, fully-loaded features, and price point. With the Mavic Pro series, DJI set the standard for consumer drones in the market, showing that it was indeed possible to put out a quality, and feature-heavy drone, that was also easy-to-use, and affordable. 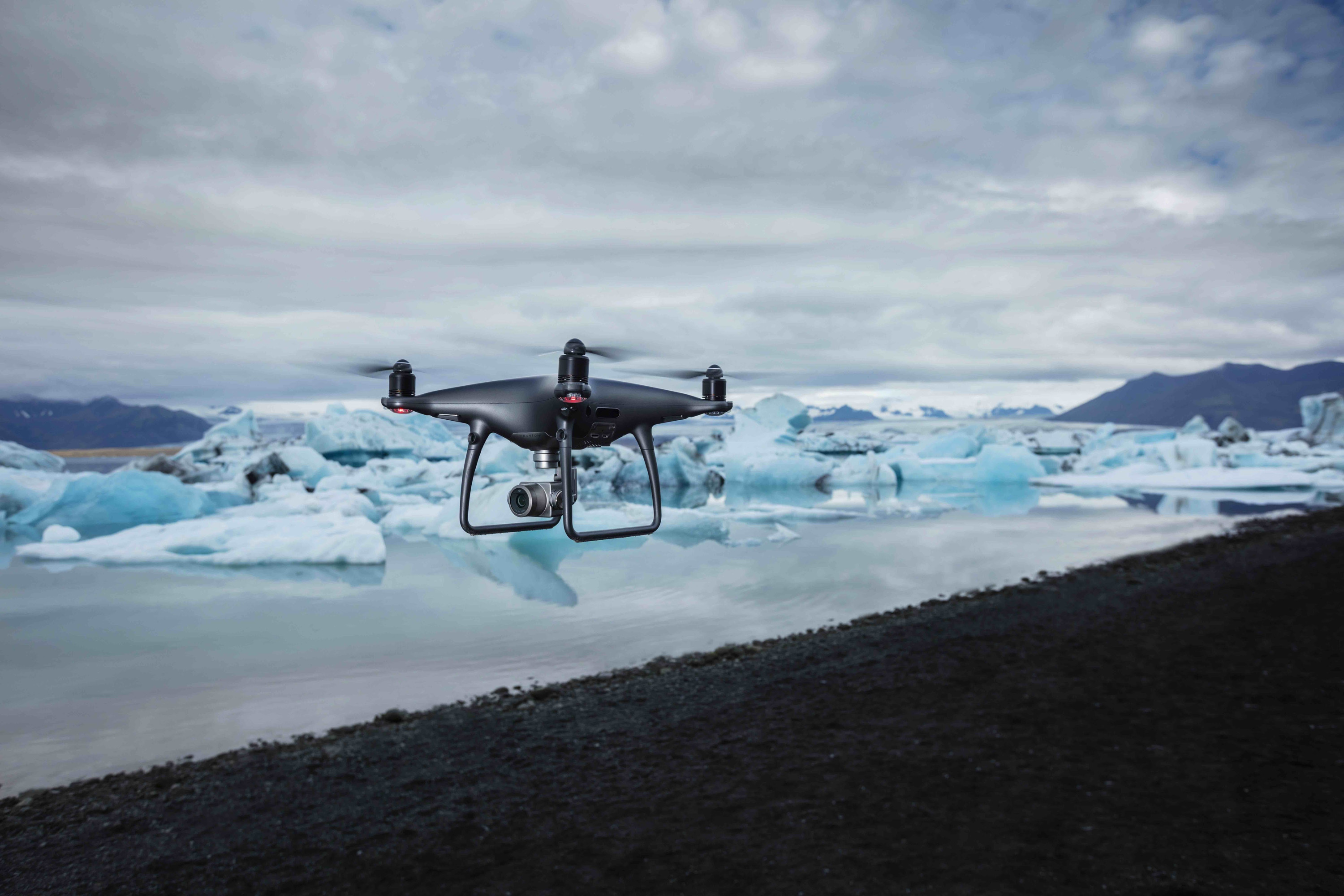 Thanks to the Phantom 4 Pro's upgraded camera and 360-degree obstacle avoidance system, DJI's iconic Phantom series line continued to make waves in both recreational and professional markets. In the fall of 2017, DJI released the Phantom 4 Pro Obsidian, a drone featuring all the same specs as the original Phantom 4 Pro but with a fresh new dark black colour.

For professional photographers, the Phantom 4 Pro's camera is the main highlight of its overall design. The Pro features a stunning 4k, 20-megapixel camera with a 1-inch CMOS sensor and up to 11.6 stops of dynamic range. With its large sensor, the Phantom 4 Pro features incredible low light performance, with enhanced colour and resolution to meet the needs of any professional endeavor. On top of its incredibly powerful camera, the Phantom 4 Pro features a full extended range of 7 km and flight time of up to 30 minutes. Additionally, the drone's 360-degree obstacle avoidance system ensures that professionals and new users alike can fly confidently, with sensors placed in all five directions for added safety and crash-free flights.

Once again with the Phantom 4 Pro, DJI showcased just how far their consumer Phantom series had come, from being mostly known as a purely recreational lineup, to a drone series that is capable and powerful enough to carry out professional endeavors. Thanks to its powerful camera, users of any level could depend on the drone to capture clear, and high-quality aerial video and stills, while still offering up a ready-to-fly and user-friendly system that could cater to drone operators of any level.

For drone pilots who felt confident flying without a full 360-degree obstacle avoidance system, but still wanted the upgraded 4k 20-megapixel camera, the Phantom 4 Advanced provided the perfect balance between professional quality and price point. Like its predecessors in the Phantom series, the Advanced featured all the same easy-to-use and streamlined controls DJI had become known for, and enabled the more professional-minded drone pilots to once again have an option that would capture stunning aerial photos and videos, worthy of any business endeavour.

In the last few years, DJI managed to dominate both the commercial and recreational drone markets, and as of late, the company has also made moves to expand their product line of professional filmmaking cameras, gimbals, and accessories. In April 2017 DJI announced the release of the Ronin 2, a three-axis camera stabilization system. In May, they announced their very FPV product named the DJI Goggles, and later in the year, DJI announced the latest camera in their Zenmuse line, the Zenmuse X7.

The Ronin 2 was designed to improve every aspect of the professional camera operating experience and had been completely redesigned to meet the demands of any professional film set. Compared to the original Ronin, the Ronin 2 offered much more versatility, with the ability to not only be handheld, but also mounted on a car, a cable cam, used as a Steadicam, or be mounted to a drone for an aerial perspective.

The DJI Goggles upon release were met with extremely high demand. The Goggles featured dual 1080 screens, one for each eye for a more immersive experience. The Goggles were also designed with onboard camera setting control, an optimized HUD (Heads Up Display,) and a new Headtracking mode wherein users could control the piloting of their drone, or even control the drones gimbal with a simple turn of their head. Later in the year DJI also released the DJI Goggles Racing Edition, which can be used for competitive FPV racing.

Finally, towards the end of the year, DJI announced their most advanced aerial camera yet, the Zenmuse X7. The Zenmuse X7 was the world's first Super 35mm camera that was specifically designed to be optimized for aerial cinematography. The camera, primarily made to work with the DJI Inspire 2, featured numerous interchangeable lens options, and a new DJI Cinema Colour System. DJI themselves had called the X7 camera their highest image resolution ever integrated on a drone camera, and essentially offered up an aerial camera that went unmatched on the market, and that could meet the needs of even the most critical professional filmmakers and photographers.

2017 was another strong year in the drone industry. A stronger pivot was made toward the commercial and industrial sector, more investments were shifted from aircraft hardware to software, and more partnerships were made that will overall benefit the industry as a whole, including DJI's announcement to take a majority stake in the camera company Hasselblad, hinting towards DJI making a bigger stride in their own camera technology. With more investment and advancement in software, drone tech will become even more affordable, with even more innovative products expected to hit the market in the near future. It is safe to say that in 2018 the drone-frenzy will continue to evolve and that we are still only in the early stages of this exciting and rapidly developing industry. 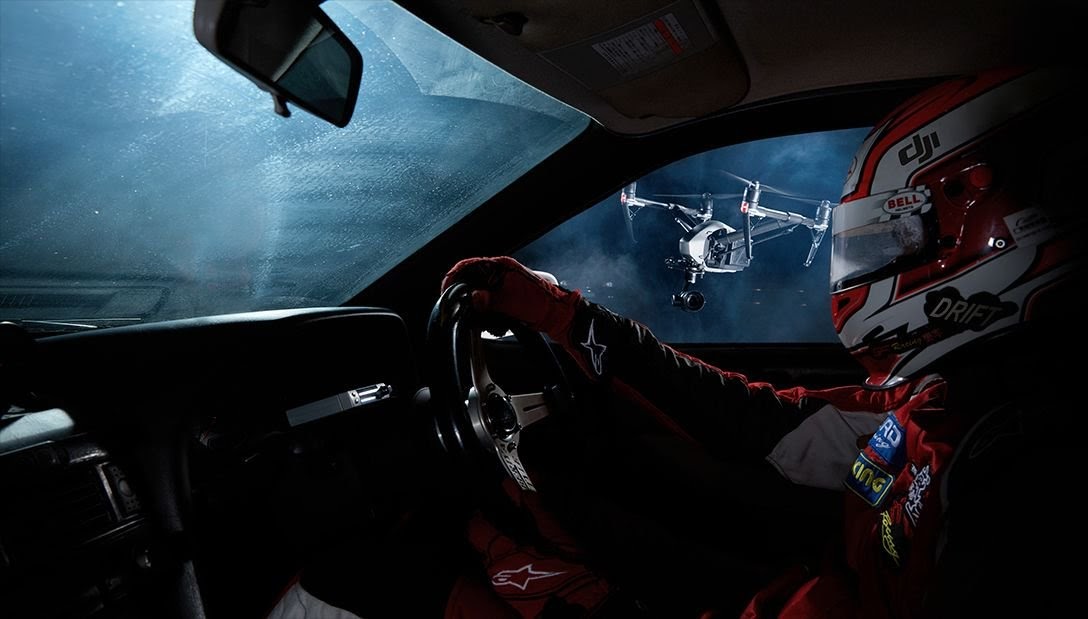